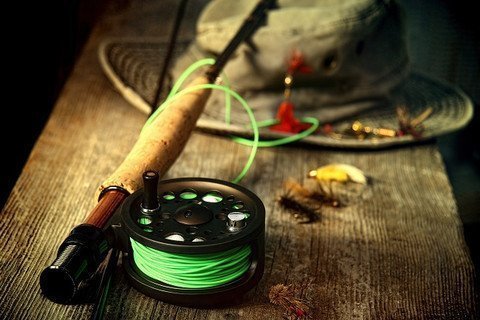 There are more special terms in fishing than you could reasonably fit in a dictionary.

If you were to sneeze while fishing, someone would probably call it “Face Shading” to refer to the way you covered your mouth and held it in to dampen the noise, then proceed to classify every movement you made, inventing fifty categories to establish that you sneezed while fly fishing and wearing waders and a hat. By the end of the day, you’d be known as a “wet covered spin sneezer” and everyone would assume you favored trout.

This might seem overwhelming if you’re just now thinking of picking up the hook and line, but don’t worry. You don’t have to know all the names to catch a fish. It will help you research what to buy and where to go, though, so we’ve put together a simple reference of basic terms to get you started.

For Your General Fishy Knowledge

Angling – Any fishing with hook and line. The hook is the angle. If you fish with one you’re called an angler. Congratulations.
Birdnest – This is the dreaded tangled fate of any fishing line that is improperly cast.
Stinger hook/Trailer hook – An extra hook attached to a lure.
Bed – Where fish create a bed for their eggs. They’re usually a section of darker or lighter mud. If you fish in shallow waters like creeks you’ll probably learn to recognize them with time.
Dry Fly – Fishing with a floating line and a fly lure that stay on the surface of the water. A popular technique for fishers who like watching fish jump or Brad Pitt from A River Runs Through It.
Livewell – A holding tank used to keep fish or bait alive.
Pitching – Method of close range fishing where the line is swung back and forth to get the bait to the desired location.

Bail – The arm on a spinning reel that wraps the line around the spool
Barb – Protusion on a hook to help keep fish on the line.
Drag – This is what feeds the line from the reel. Specifically it refers to a plate mechanism that applies friction to the line.
Rod Action – The amount of bend in a rod when you apply weight to it. This affects everything from casting to reeling.
Rod weight/power – Generally fishing rods are rated by the weight they can handle, and you use that rating to match it with the proper line. Fly fish rods are numbered 1 through 12 and spinning and casting rods are separated into six categories: Ultra-light, light, medium-light, medium, medium-heavy, and heavy.

Baitcast – This reel sits above the rod with the spool parallel to it. The fisher has to control friction on the line with the thumb. It’s a great reel for general use, and great if you’re catching bigger game, but the casting is tricky to master. It takes a lot of practice, so be patient with it.
Spinning – A reel that sits below the rod. The defining feature of this reel is an arm that continuously spins line around an open face spool so the line flows freely. These are typically used with lighter lines.
Spincast – This reel was created as a solution to the birdnest problem. It’s similar to a baitcast in where the reel sits, but it wraps the line similar to a spinning reel. The most defining feature, however, is the button that releases the line, which makes casting much simpler.

Braid line – A line comprised of several woven strands.
Fly line – A heavier type of line by necessity because fly fishers use that weight to propel and manipulate the line. The most common is the floating line, but there are also sinking lines, which we won’t get into here.
Fluorocarbon – A type of line made from polyvinylidene that is designed to be essentially invisible in water.
Lead core line – A braided line made of lead sheathed in dacron metal.
Monofilament (mono) – Simple plastic line. This is the most common form of line for freshwater fishing, and probably a good place to start before you progress into more specific types of fishing.

These are basically artificial fish food. It’s sort of like if someone tried to catch you by showing you a plastic pizza. Except these work better than that probably would. Here are few different types of lures.

Fly – This is almost any combination of patterns tied to a hook to imitate anything from flying bugs to frogs. They’re are much lighter than typical lures due to the casting nature of fly fishing. The types range from dry flies, which float on the water, to wet flies, which sink, and about a million other variations in between.
Inline Spinner – A fishing lure with one or more blades that rotate around the shaft..
Jig – A metal fishing lure with one or more hooks.
Plug – A hard-bodied lure made of either wood or plastic, usually in a fish-like shape. When in the water they wobble side to side in a swimming motion. Types of plugs include crankbaits, jerkbaits, poppers, wobblers, and minnows.
Spoon – A lure with a reflective finish to attract fish. It’s shaped like the head of a spoon, but you probably shouldn’t try to eat with it.
Swimbait – Any kind of sinking lure that imitates fish as it moves. These often have tails to create swimming motions.

Slip Bobber – A float made of foam or wood. They’re classically red and white, but you’ll see them in several combinations of bright colors. Set this above the weight and hook with a line knot, then sit back and watch for it plop into the water.

Split shot – A small weight with a split for a fishing line. Once you get the line in just squeeze the weight until it clamps onto the line.

A rig refers to everything you put on your fishing line. That means bait, lures, weights, leaders, flashers, forks, dinner plates, computer monitors, your truck, etc. If it’s on your line, it’s part of your rig. There are several established rig constructions including Alabama, Carolina, Texas, Drop Shot, and Umbrella, but we won’t get into all that here.

Obviously this is not a complete list, but it’s enough to get you started. There are plenty of places around the web you can read on your own, whether you’re interested in fly fishing, or just looking at general fishing. But the best way to learn is to just get out there. We’ll do more specific posts later about knots, rigs, and reel and rod variations so stay tuned. In the meantime, happy fishing.

1 thought on “Fishing Terminology for Beginners”