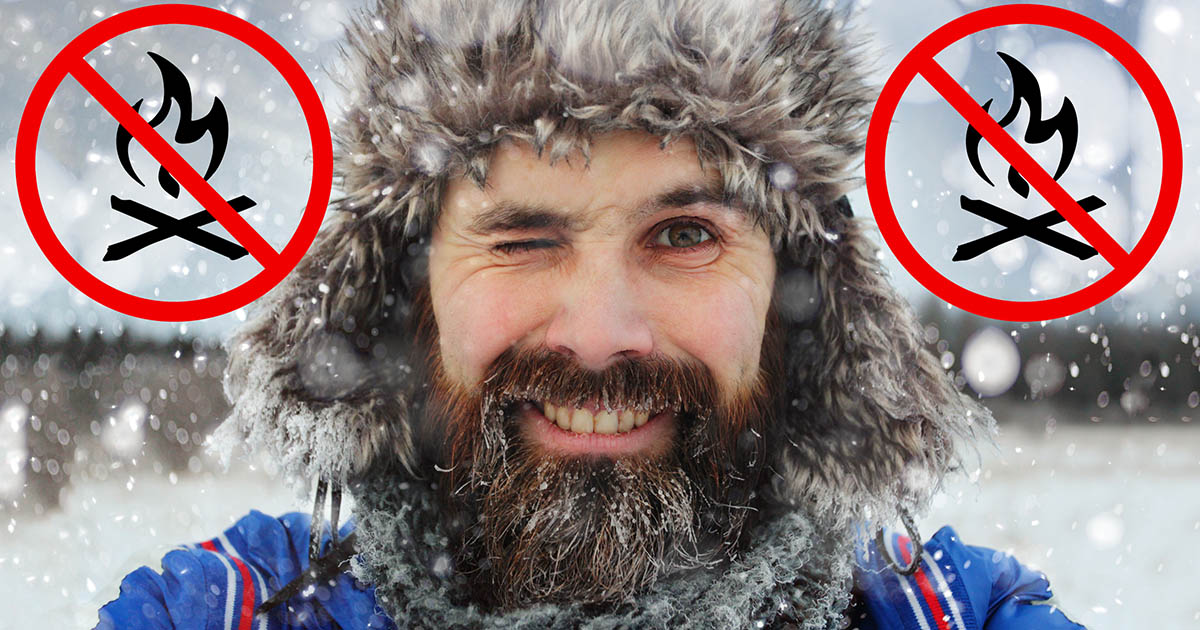 Whoever said you need a fire for a camping trip is a liar and probably smiles too much. Camping is fundamentally improved by the absence of a fire. If part of camping is being miserable, then you could argue that someone hasn’t really camped until they’ve gone at least one night in the woods without lighting a fire. There’s no better way to experience the full bitterness of nature as it presses every molecule in your body to a standstill while you shiver against a butane burner and talk about how nice it is to get out of the city.

Fireless camping can be an intimidating prospect for the novice, so we’ve compiled a step-by-step guide to help you through your first night of genuine misery.

1. The first step to camping without a fire is to accidentally end up in a camping spot where fires are not allowed. If you miss this step the whole operation is bunk, because no decent citizen in their right mind would go an entire night in the wilderness in the middle of October without a fire on purpose.There’s a subtle trick to accomplishing this that centers mostly on remaining ignorant to the fact that every piece of wilderness within a thousand miles of you has been marked as a no burn zone. In fact, you’ll find that ignorance and general stupidity are the key ingredients to a proper no-fire camping trip.

2. Once you’ve set out on your trip in a healthy state of ignorance, make sure to keep your expectations optimally high. At this point you should have an ice chest full of food specifically packed to be cooked over a fire, but that could conceivably be eaten cold later that night when you finally admit to yourself that you are doomed. But we’ll get into that later.

3. Don’t give up. The first campground you come across will be closed. This is when realization dawns on you, that, maybe, it’s not quite the best time of year for camping just yet. But at this point you’re an hour or two into the trip, and if you’ve built up enough optimism along the way that you’ll be ready to tell yourself that if you keep driving to a different campground it will, for some reason, be open.

4. By the time you’ve established that all public campgrounds are closed it should be late enough in the day that it’s no longer practical to drive all the way back home. This is the point that you make the long-honored traditional decision of driving down the back roads. You can take your pick of idealistic goal with this decision: Maybe you’ll find a spot that’s deep enough into untamed lands that the park rangers won’t descend on your camp and bludgeon you with pink slips. Maybe somewhere out there is a green Eden with a big sign that says “All fires welcome. Seriously, just go crazy”.

5. Spend no less than two hours searching for this non existent place. That should be just about the right amount of time to not only infringe on your sanity, but also use up enough gas so you can talk about not having enough to get home later on (this is absolutely vital to the attempted trip home). And during this futile, but culturally significant search, feel free to make references to any movies you’ve seen recently that feature kidnapping, torture, murder, and general terror in forests. Talk of people being mutilated in the woods is a healthy way to make sure everyone is on the same page when you’re all shivering in complete darkness later on.

6. Once you give up and just stop at any clearing that doesn’t appear to be on private property, be sure to keep feeding your denial. The sun will still be mostly up, so it will still be easy to tell yourself it won’t get that cold tonight. You can even go as far as taking off your shoes and wading in the creek nearby. Wet feet are considered premium flavoring when camping without a fire.

7. Now it’s time for some meal planning. It’s important to remember that it’s not at all frowned on to have a gas or butane burner so long as it isn’t too big. Since the point of this entire exercise is to maximize your misery, you never want to use something that is so efficient that it borders on luxury. A good way to check if your gas stove is too big for this activity is to set something on it. If you can put a can of beans on your burner without worrying it will tip over the second you turn away, it’s probably too big.

8. Most importantly, it needs to take a sufficient amount of time to heat the beans up that you start rummaging through all the chips and crackers you  brought, and even go so far as to stare down the cold package of hot dogs, realize you shouldn’t use up the gas to heat  them up, and proceed to take them out of the package and eat them cold. This is actually a very efficient use of food, as you can usually season the cold hot dogs naturally  with the salt from your tears.

9. As to the issue of heat, you’ll find that dealing with the temperature is actually very simple. Outside is cold. Not having a fire will keep it that way  and there’s nothing you can do about. These elegant facts will eventually seep into your brain after you’ve layered on every piece of clothing and blanket you brought but can still feel the empty night air leaching all remaining warmth from you very bones. At several points you will try jumping up and down and saying unhelpful phrases like “fire’d sure be nice right now” before the abject futility of these gestures cripple you into a shivering ball on the ground.

9. This is a sign that your trip is going well. When you go home you’ll tell people about the nice spot you found, the lack of mosquitoes and how bright the stars were. But the truth is, this moment where you’re helplessly bundled in three sleeping bags and rubbing your head into the ground            hoping that somewhere deep down in the earth’s crust you might rediscover that ancient concept you once knew as “warmth” is the moment you will remember. The morning ritual is actually the same as a regular camping trip with a fire, in that it revolves around coffee. If you got any sleep at all during the night, you will likely wake up in a fragile sliver of warmth that shatters into needles of cold the second you shift a leg outside it. Spend a good hour making futile attempts to stay warm by remaining completely still. You’ll be simultaneously drawn to the idea of getting up and making coffee, but frozen in place by the thought that once outside your tent you will spend an hour watching your fingers turn black with frostbite while waiting for the water to boil.

10. Ultimately you will be driven outside by a sudden and horrifying need to pee. This will be the most terrifying ten minutes of your life. The mere act of unzipping your pants will feel like taking that first step off a cliff. But you’ll think you’ve come this far outside your tent, and, if you can still find anything to pee with, maybe going to the bathroom will produce its own kind of warmth just from the friction of bodily fluids moving through you. You’ll be wrong, but that lie is important to get things going.

11. If you did everything in step 6 right, the gas in your car should be low enough to head home. I have found that just under a quarter tank hits that magic spot of seeming to be enough to find a gas station, but still clicks on the “low gas” light around the time you see a sign telling you the next town is 10 miles away. This is perfect timing to blanket the car in a quiet panic while still allowing for the distant hope that the car has the secret ability to travel the entire mountain pass on fumes.

Keep your eyes open, though, as this is generally the part where a gas station miraculously appears in the middle of nowhere. You will not be able to explain why it’s there, and the uncomfortably silent attendant working there will offer no communication outside a vacant stare likely developed from the hours spent in his bunker funneling moonshine into handcuffed campers who wandered onto his property.

12. Coming home is one of the most important steps in the no-fire camping trip. This is the part where you take all the uncooked meat warming to questionable status in your ice chest and shove them into the oven. You will also need to consume all the alcohol you have at this point.

While you’re gorging yourself on heavily seared meats underneath a mountain of blankets with the furnace up to 90 degrees, you must otherwise act as if nothing was wrong with the trip at all. Deflect questions about your three missing fingers with observations about how refreshed you are from the clean the mountain air, how clear the water looked in the morning sun, and how you’d like to go up again soon. Then later, when no one is looking, take a cursory look at how much RVs are going for these days.